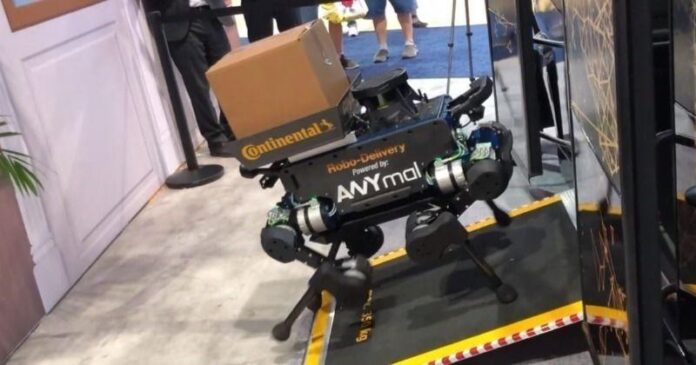 They do not look like the adorable robot dog that Sony put on sale long ago. Aibo, the Japanese canine, has been given distant cousins . If the robot dog emulates, within its limitations, the companion animal par excellence, Continental’s proposal is aimed at recreating the universe of work dogs. In this case not for grazing, but to cover the home delivery sector . Something similar to the models that Black Mirror presented in its fifth chapter of the fourth season, Metalhead , but without such negative results.

It is one of the proposals of the mobility technology presented during the celebration of CES 2019 in Las Vegas; an event known for, in many cases, going very far in the technology sector. So much so that the proposals never finish materializing. In this case, it is the turn of a sort of autonomous robots in charge of the last mile deliveries . How? Continental alleges that its dogs increase efficiency, security and availability when delivering orders; a small autonomous truck would bring the dogs to nearby delivery points, then they would search for their destination. Not with the smell, but with its sophisticated GPS system. Once located, they would only have to run to their corresponding delivery door no more than a mile.

The idea of ​​the Continental team would undoubtedly create a synergy between two sectors . The one of the electrical transport and 100% autonomous, that improves the efficiency in the circulation by the cities and improve the services delivery. According to the Head of Systems and Technology of Continental, Ralph Lauxmann, through a statement of the company, “both are electrified, both are autonomous and, in principle, both can be based on the same portfolio of scalable technology. These synergies create an exciting potential for holistic delivery concepts that use similar solutions for different platforms. Beyond this technological base, it is reasonable to expect that a whole value chain will be developed in this area. “Companies like Amazon would find in Continental’s proposal a vein to improve their maligned home delivery services

To date it is part of a pilot project of the company, so there is no date to see these dogs run through the streets of cities . In any case, it is not the first experience of a technological flirting with the universe of robot dogs. Boston Dynamics already presented Atlas, its robot dog, a few months ago . He has been able to dance to the rhythm of music, open doors and even run